Boosting the battle against childhood cancer

Kalmar’s latest charitable program is increasing awareness of the disease that kills more children in America than any other condition. 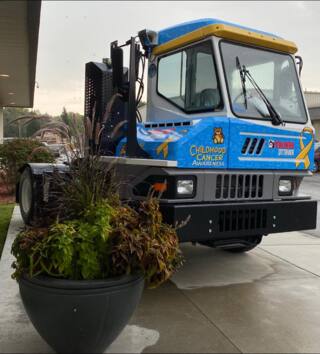 Childhood Cancer Awareness month is recognized every September by childhood cancer organizations around the world. Although treatments have advanced and mortality rates have decreased, cancer still kills more children in America than any other disease - even with a curable diagnosis, many children don’t have access to the medical care they need.

Earlier this month, Kalmar auctioned two Kalmar Ottawa terminal tractors wrapped in light blue with the message ‘Childhood Cancer Awareness’ to raise funds for research and treatment. As per previous auctions, the only condition was that the winning bid must be higher than the dealer net price, with the highest bidder having the opportunity to donate the difference to the childhood cancer charity of their choice.

The winner of the first truck was Wiese USA. Director Grant Sauerbrunn explains that Kalmar’s philanthropic efforts are aligned with Wiese’s culture. “One of our core values is ‘leading by serving’ and one of the ways we do that is by giving back through our employees and the communities in which we operate and live,” he says.

One of the largest material handling equipment companies in the Midwest and Midsouth, Wiese USA is an authorized dealer for best-in-class industrial equipment. The company employs almost 1000 team members across more than 40 locations.

“We will display the truck at local cancer awareness events to help raise awareness, and rally our employees and customers to join the fight against pediatric brain cancer.”

The second truck was won by Metro Airport Truck, a family-owned dealer for new and used yard trucks for sale, long-term lease, short-term rental, parts and service in the Midwest since 1980. As with Weise USA, Metro Airport Truck will place the truck with the childhood cancer awareness message in its rental fleet.

The company chose ChadTough as the non-profit organization to receive the donation from the purchase price of the truck, totalling $35,000. The mission of the ChadTough Defeat DIPG Foundation is to inspire and fund game-changing research to discover effective treatments for pediatric brain cancer.

“We believe strongly in this cause and have supported Chad Tough and its Pediatric Brain Tumor Center at the University of Michigan for many years through their gala and running in their annual 5k,” says Doug Jones, general manager at Metro Airport Truck.

“We will display the truck at local cancer awareness events to help raise awareness, and rally our employees and customers to join the fight against pediatric brain cancer,” he adds. “We were very excited when we saw that Kalmar Ottawa had targeted pediatric cancer charities with this year’s special truck and knew we had to get involved.”

“We always try to pick a campaign that is near and dear to the Kalmar family,” explains Doug Queen, VP solution sales, terminal tractors. “We chose childhood cancer awareness to honor those who are or have battled childhood cancer, including Silas Watkins (the son of a Kalmar employee) for whom we have added a special decal to the trucks. Silas has inspired an entire community through his battle with osteosarcoma. Every day his legacy brings more awareness of the needs of children with cancer.”

In addition to the contributions of the dealers, Kalmar will donate $5,000 to BabyJay’s Legacy of Hope; a charity organization that provides gas cards, utilities, clothing and other essential services to families of children battling cancer.

As a community leader, Kalmar believes it has an obligation to be a good steward for these types of vital programs.

“Since starting this campaign, we have learned that childhood cancer only receives 4% of all cancer funding nationally,” concludes Queen. “It is through programs like this that we can begin to grow that percentage and increase awareness.” 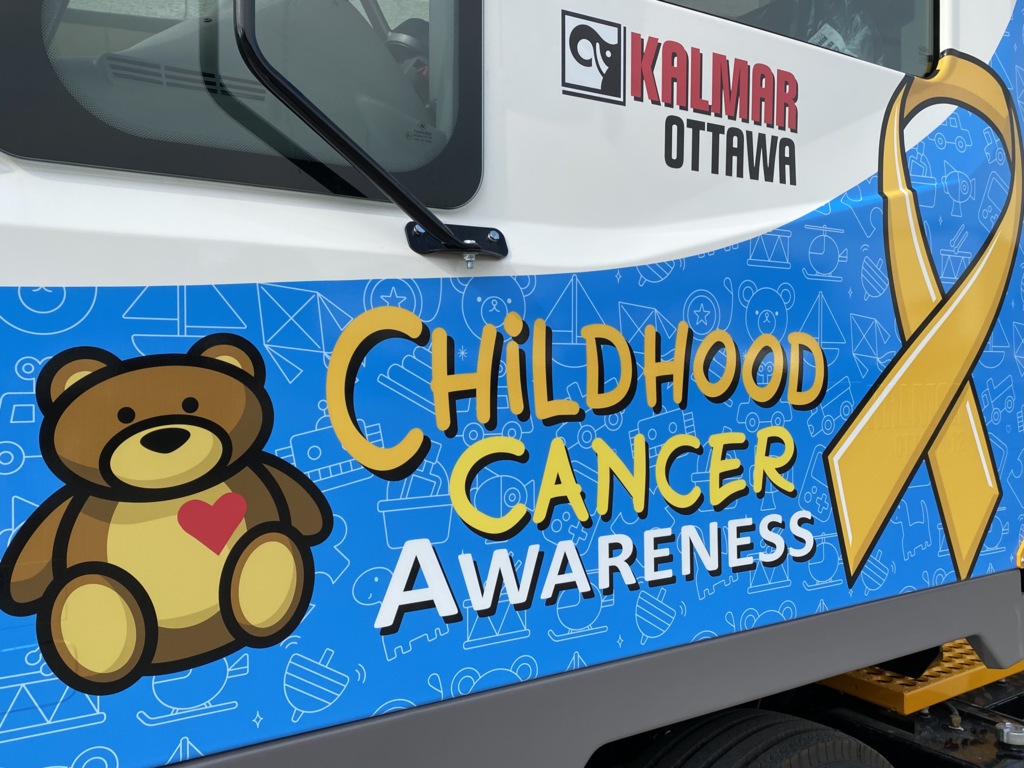 When Mikael Granl&ouml;f was a teenager, he changed the gearbox in his father&rsquo;s car. Forty years later, he&rsquo;s still doing that &ndash; and much more &ndash; on the next generation forklifts.
People

Modern container ports and terminals are buzzing hives of activity where people interact with manual and, increasingly, automated machinery as part of their everyday work. Every terminal has its own unique set of risks to address, hazards to analyse and challenges to overcome &ndash; and a thorough operational hazard analysis (OHA) is the blueprint that helps to ensure safety remains the number one priority.&nbsp; &nbsp;
Automation People Safety Technology

Smart, sustainable upgrades to give your straddles and shuttles a big lift

After years of loyal service, your straddle and shuttle carriers deserve a little extra TLC. Our Kalmar Modernisation Services offering includes a range of smart, cost-effective and sustainable upgrade options that will help you get more from your existing fleet and extend the lifetime of your machines.
People Services